This post serves as a farewell message to my old friend “S Klub” and a customer review for a new friend of mine, “Continental Hotel Beograd Spa” as well. Readers who are following will remember my first “extreme experiences” post about the “outdoor pool necessity” in this city, and I feel so proud about myself that I’ve found another option (it came so late!)…

Goodbye to far and noisy open-air cinema, welcome to one of the oldest hotel health clubs on the world! I promise, I’ll not complain despite all the funny moments I had, I’m happy now to have a sun bath place which is so close to where we live and of course I’ll wear my “optimistic costume”, writing only and only what happened.

It all started to learn that our “pirate” was out of town yesterday to drive me so it suddenly flashed on my mind; I’m living next to Continental Hotel (which was a member of Intercontinental chain years back)! We had a look on their web-site before to check if there was an outdoor pool but we were not so lucky to find some information then and yesterday I gave there another chance to reach some information in English saying “sun terrace”; woot woot!

I gave a call and Dragana on the phone understood that this lady was in need of sun! A small bag was prepared right after the phone call and it was already feeling better that I don’t need to carry towels this time! I arrived the hotel after a 10 minutes very slow walk (I like the patio behind Delta Holding headquarters), first wandering in the lobby with the hope of a “health club/pool” sign winking. Some other signs (written in a font of giving you the feeling it’s not 2012 anymore, we’re in the end of seventies) such as “Thai Massage”, “Maestro Jewelers”, “Piano Bar” and one or two banquet rooms which looked “very tired” were caught by these curious eyes. I went back to the reception desk asking for directions and learning “it’s the last right door in the lobby” (which reminded me the time I was working in the hotel and telling the new colleagues in the orientation programme that “we escort our guests instead of pointing out the place”, nice days they were…); unfortunately another retro sign hanging 1-2 meters in front of my new discovery had blinded the angle of what I was looking for.

I opened a small many times oil painted white (to yellow) door and welcomed by a nice employee who first directed me to the “red” (why are the chairs / couches at many places including even the logos of supermarkets, entrance of shopping malls, trams both old and new ones in Belgrade chosen to be in this color? Many people have a brief information about the transition of Yugoslavia from its communist years, is it really necessary to be reminded by putting that into our eyes everywhere, a health club is not much needed to be linked to the country’s history at the end) area as he had to wait for another colleague that I could pay the entrance fee (1500 dinars – Hurray! It’s cheaper than going to S Klub as we were paying 2000 (nearly half of what you would pay to a legal taxi) to our pirate for our transportation -). 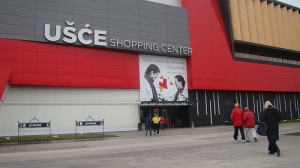 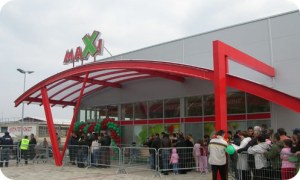 He then changed his mind of awaiting me after 2-3 minutes of me looking around, learning that the ladies sauna is upstairs, thinking “wow, that’s quite a narrow entrance for a health club” and having the hope of seeing a wider area inside. He let me in saying that I could pay when I’m leaving and giving my two bath towels with the locker key (of course the key is chained in a “red” sponge) that I totally forgot in my pocket and will give back in my next sun bath session. He first handed me the key for locker number 1 but then kindly asked it back saying “it’s for security purposes”. I was thinking that he could easily be a summer trainee after the key and payment issues…

I thought my locker number was 22 (which was 30 in an unknown past time, according to the red sponge – click on the first photo for a bigger size please!) and I was right! The second photo was taken after receiving the sms from my husband saying that “You should take some photos!” in reply to my happy “goodbye S Klub” message. It’s the first thing which directly got my attention upon my entrance to the ladies lockers area. For the ones who are in need of help for “what kind of a tool it is?”; it’s a scale that I had seen a similar version in my childhood years when I had to visit the doctor for injection (the doctor was able to measure my height with this tool when he was taking the metal stick out with numbers on it from the middle of this robotic thing as well – what kind of a material and space waste it is! -), a bit frightening, isn’t it? 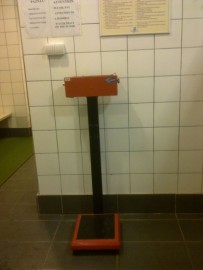 After locking some of my stuff, I entered the pool area which is surrounded by big glass doors all around and then went out to the small sun terrace looking very peaceful… I felt happy! No noisy kids, no funny movies or prisoners were existing in this small heaven (check out my first “extreme experiences” post ) of mine!

I was feeling quite hungry that after arranging my sun bed, I went back to the pool area and Dragana was re-filling the pitcher with cold water at the bar. I asked her for the menu and there were 7-8 items in total for the food part. I started to read it; the last two were desserts and the rest was whether with “tuna fish” or “salmon” and of course there was no option of having a “hot snack”. I missed the food I could get in S Klub and ordered “two small sandwiches with salmon and olive paste” which was served in the plate as “two big sandwiches with salmon and olive slices” consisting the small lemon pieces “in the sandwich (not next to) – with its rind around” (they ended up to be carefully separated from where they were and added into my Knjaz Milos – a Serbian sparkling water brand – filled glass as I have not tried to eat lemon with its rind around in my life yet and it didn’t look like a good “let me try” idea).

The rest of the day went on with going inside – cooling down in the pool and going outside – sweating like hell under the sun until I thought this routine cycle was good enough for that day and it was time to go home to drink a nice chilled beer.

After another visit to the frightening scale area to collect back my stuff from the locker (where some ladies seemed like in a rush to be the first in the “only one” designated shower area), I headed to the reception desk (do not ever get an image of a decent reception desk, it’s a very tiny room where they could manage to put in a desk with chair that the employee can sit and try to communicate with the guest from a small window area which you normally see in the kiosks, and of course computer is not existing) of the health club. I saw a lady sitting in the place of my welcome trainee (shifts changed), busy on the phone turning her back to that small window. I could easily walk away like a guest staying in the hotel and no one would realize it. But as a fair and happy customer, I told the busy lady on the phone when she made a break that I wanted to pay. Just like my trainee from the morning shift, the lady also started to look a bit excited when she heard the word of “payment’… She first finished her talk on the phone, then attempted to make a phone call and then quickly changed her mind, started to search for something in the agenda on top of her desk, turned some pages of it and then remembered to ask my name (my sweet trainee had asked it prior to my entrance, I also had to spell as well, because there they have a different version for guest registration book – in fact a year agenda – which the employees are putting your name instead of yourself). She approved that my name was existing in her agenda and said “Ok, 1500 dinars.”.

Now, my dear readers I’m asking for your silence, as I was already a very good girl to insist on paying although I could easily walk out and that much of payment hazzle was quite enough for me in a day; I suddenly wanted to forget about the sandwiches. Just when I took out my credit card as I saw two credit card slip machines, the lady started to get excited again. She said “You wait for my colleague or you pay cash”; it was a direct request she had made and I had no other tolerance left for waiting. I gave her 2000 dinars which unfortunately didn’t work very good again! She turned some pages of her agenda one more time, checked some shelves and envelopes, even had a look in her own purse but there was no “500 dinars” existing to give back. She, another time attempted to the telephone and no need to say that she changed her mind quickly again, said “Ok, wait, I change money!”. She went out from her small designated area saying something Serbian to another employee and I followed her to the reception desk located at the lobby. We headed to “Cashier” sign which is very normal for money transactions in a hotel lobby, but the interesting part was the man “sitting” there and looking like a real “accountant”. I’m sure you got the right image!!! Anyway he changed the money but I had to wait until they finish their small chat that the lady could give my money back that she kept in her hand until the end of very important dialogue she had with her colleague. I said “Thank you!”, left the hotel and honestly felt so good that I didn’t remind my sandwich payment while I was on the way back home.

I will have my sun bath sessions at Continental Hotel after now on!

I like: their pool with small sun terrace, I like Dragana who has a name tag stating “Housekeeping” but working for F&B, the health club clientele.

Beautiful photos of hiking and other outdoor adventures.

Diary of a Desert Fox

a dose of the sunny, lovely, hungry, thrifty, and motherly that is in me.. and in all of us

Beginning Middle and the Edge

Are we there yet?.... I will get there, Anguilla, Sint Maarten Saint Martin ..... Caribbean is calling!!

My new life as an expat wife...

where observation and imagination meet nature in poetry

on your way to lala land

a place where anything and everything goes

Spontaneous thoughts on a humble creed